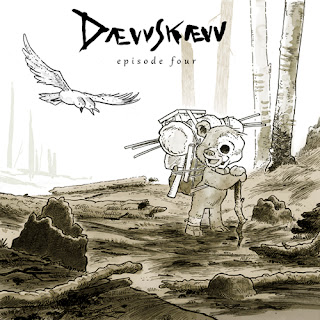 Exactly one year after the release of the electronically oriented and tape infused Episode #3, Dævvskævv are due to release the next part of their episodic series of albums and/or EPs (pick your favorite word). The fourth episode, simply named Episode Four, creates its own musical universe, fusing metal, pop, electronica and the avant-garde, spread across its total of eleven tracks.

In addition to playing around with various genre crossbreeds, Dævvskævv also play around with links to other projects that the Dævvskævv’s members are a part of, creating a link to the orchestral doom metal band Omit with the re-composition and partial remix of Omit’s recent track Medusa Truth, in the form of the track entitled Maya Lie.